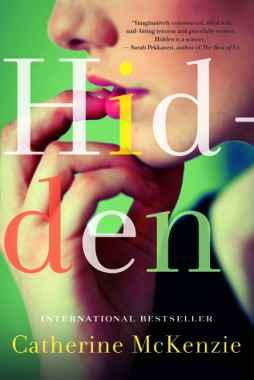 Definitely an interesting read! Catherine McKenzie never fails to deliver in her novels and HIDDEN is a great reflection of that. While not as strong as some of her older novels, a hearty plot line keeps readers enthralled until the bitter end. Watch out for that epilogue!

DISCLAIMER: Novel sent via NetGallery in exchange for a honest review.

SYNOPSIS: While walking home from work one evening, Jeff Manning is struck by a car and killed. Two women fall to pieces at the news: his wife, Claire, and his co-worker Tish. Reeling from her loss, Claire must comfort her grieving son as well as contend with funeral arrangements, well-meaning family members, and the arrival of Jeff’s estranged brother, who was her ex-boyfriend. Tish volunteers to attend the funeral on her company’s behalf, but only she knows the true risk of inserting herself into the wreckage of Jeff’s life.

REVIEW: I love Catherine McKenzie. Not only is she Canadian, she writes stories with plotlines that truly enthrall the reader. Literally every time I hear a synopsis from her, I want to immediately dive in. HIDDEN was no exception.

While walking home from work one day, Jeff is hit by a car and immediately killed. While his wife Claire and his son are obviously devastated, another woman is taken apart from his death: Tish, a coworker in his HR department. While normal grief is well, normal, Tish feels like she’s been ripped apart at the seams. When Tish volunteers to go to his funeral on the companies behalf, Tish is crossing lines between a secret life she swore she’d never tell a soul about and Jeff’s personal life – all too real and right in her face. When Claire suspects there’s more to this Tish woman than just a coworker, lives and secrets unravel.

The story is told in three points of view: Jeff (showcasing past events in his life before his death – i.e. how he met Tish, etc), Claire (present point of view) and Tish (present point of view). It’s interesting because we get a first hand account at two very important people in Jeff’s life – with two very different perspectives. Claire is his wife but who exactly is Tish to him? While it’s hinted at throughout the entire novel, it’s never fully defined and it keeps the readers on edge. You’re literally sitting there, turning pages, wondering who Tish and Jeff “are” to each other.

The complexity of the issue at hand here is threaded within each word of the story. While it’s almost never fully acknowledged, we are talking infidelity. A grown up problem. Infidelity is never cut and run, and it almost always unfolds in a messy conclusion. HIDDEN is just exactly this way – those hoping for a cut and dry ending will be disappointed. What is at this novel’s core is how infidelity impacts those around you, and what to do when you’re faced with family vs. affection. I LOVED this novel’s adult take on it.

Fair warning – the epilogue will have you second guessing the entire novel. You’ll be angry. You’ll be agitated. Is all fair in love? This novel will tell you that it’s most deceivingly not.